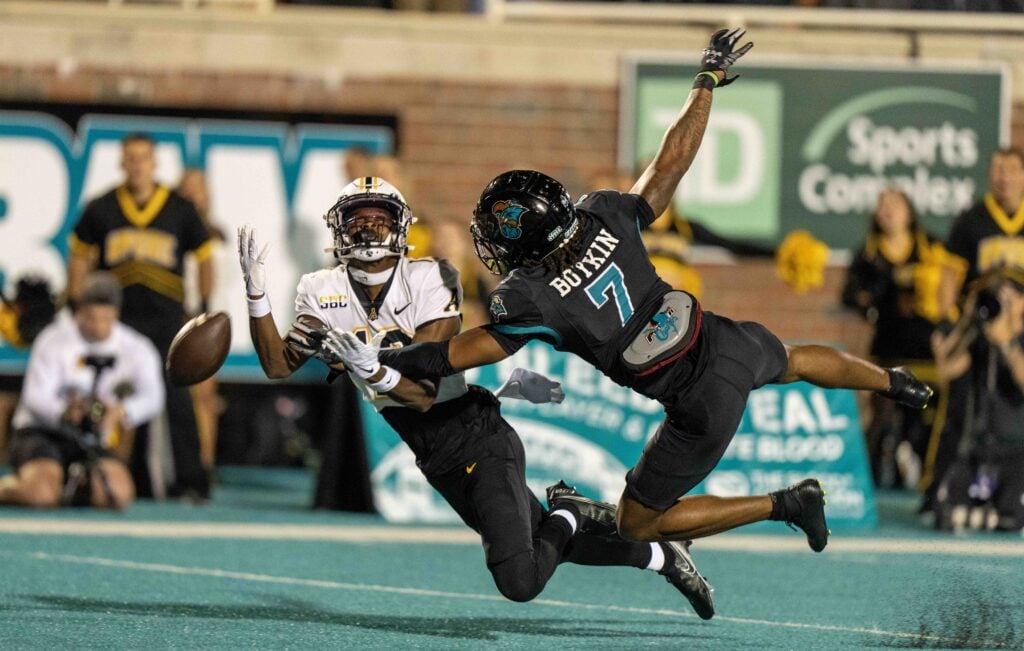 Coastal Carolina CB Lance Boykin is one of many talented defensive backs in the 2023 NFL Draft. After resurrecting his career with the Chanticleers, where does Boykin’s scouting report land him in the 2023 class?

When talent and work ethic mesh together, it provides prospects with the best chance to succeed. Those kinds of prospects also have a way of finding success early, regardless of their recruiting status. Boykin is a prime example.

Boykin was a mere two-star recruit in the 2018 cycle. He played at High Point Christian Academy and signed with the Old Dominion Monarchs out of high school. And as a two-star true freshman, he’d go on to start five out of 10 games played, logging a pick and four deflections in the process.

From there, Boykin remained a steady contributor on the defensive side of the ball, starting four more games in 2019. His career was put on pause in 2020 when Old Dominion canceled its football season due to the COVID-19 pandemic. But after a year away from the game, Boykin transferred to Coastal Carolina and picked up right where he left off.

Over a two-year stretch at Coastal Carolina, Boykin put up 82 total tackles, 3.5 tackles for loss, two sacks, five picks, 12 pass deflections, and a forced fumble. He also distinguished himself off the field, earning Dean’s List placement in the fall of 2021 and the spring of 2022, and taking the title of team captain in 2022.

Boykin’s next 2023 NFL Draft milestone is coming up, as the Chanticleers CB will look to prove his mettle against tough competition at the East-West Shrine Bowl. Looking at the tape, here’s how Boykin stacks up.

Boykin’s size is what makes him stand out. At 6’3″, 200 pounds, with arms nearly 33″ long, he can envelop opponents both in pass coverage and run support. That length is an appealing tool in press-man alignments, as it allows Boykin to dictate reps. He can also use that length to obstruct passing windows and make plays in zone.

Outside of his length, however, Boykin’s profile is largely average. He has good long-track explosiveness, but he’s not elite there, and he lacks elite long speed as well. Boykin has enough agility and fluidity to redirect, but he’s not overly spry or sudden as an athlete and often plays too tall in his stance.

Athletically, Boykin is closer to average than elite, and he also has room to refine his game on the operational side. In off-man, he can be late to react and undisciplined in maintaining leverage. Meanwhile, in press, Boykin could strive for more consistent patience, and when he loses his step, he’ll rely on his length to a fault.

Boykin does have enough athleticism to hold a rotational spot in the NFL, and his ability to play the slot and the boundary adds to his appeal. He offers reasonable upside as a press and zone cornerback. Additionally, he’s a high-character player who has the necessary special-teams experience to provide value in that phase on Day 1.

He’ll have to truly maximize his operational traits to have a shot at becoming a starter. But in the immediate timeline, Boykin profiles as a quality depth CB with special-teams utility — potentially worth a late Day 3 pick.