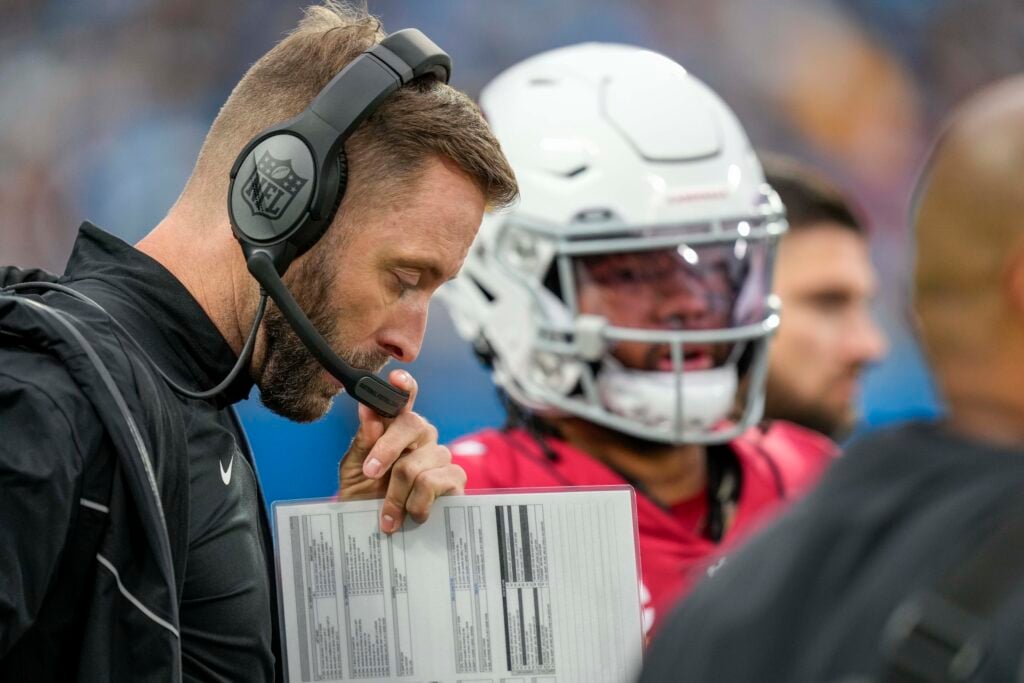 The Arizona Cardinals fired Kliff Kingsbury 12 months after his team finished 11-6. The Cardinals couldn’t replicate their success from a season ago, finishing 4-13 in 2023. Even with a healthy Kyler Murray, things were incredibly rocky for the Cardinals’ offense all season. The offensive struggles contributed as just one of the reasons Arizona moved on from the coach they signed to an extension just last offseason.

It’s easy and warranted to question the personnel afforded to Kliff Kingsbury as one of the many contributors to the Cardinals’ failures. Steve Keim showered Kingsbury with gifts in the form of wide receivers.

He traded for Marquise Brown and DeAndre Hopkins while drafting Any Isabella, Hakeem Butler, KeeSean Johnson, and  Rondale Moore. Christian Kirk was already in the building but walked in free agency, joining the playoff-bound Jacksonville Jaguars.

During Kingsbury’s tenure, Keim drafted only one offensive lineman inside of the top 100. The position has never been a strength for Arizona throughout that time, but they ignored it. Still, the main reason why Kingsbury was hired was for his offensive mind. But when we look at how his offenses fare during his time in Arizona, there isn’t much to write home about.

From 2019-2022, the Cardinals’ offense ranked 16th in EPA over that time and 18th in offensive success rate. And during that time, it was the passing attack that let them down. They ranked 22nd in EPA and 21st in dropback success rate over that time. Murray has missed nine games over those four seasons, but Kingsbury’s offense struggled with Murray healthy.

The Cardinals finished 13th in offensive DVOA in 2019, 19th in 2020, 15th in 2021, and 30th in 2022. But the most disturbing thing about the Cardinals’ offensive output was the consistent and steep downward trend of the offense in the back half of the season. His team’s record dating back to his time at Texas Tech followed the same disturbing trend.

This was the smoking gun that led to Kingsbury’s dismissal. The onus is not solely on the coach to progress the QB. In fact, most of the responsibility falls on the player because the CBA makes so much of the technical work come in the offseason through personal position coaches. Teens don’t have the time to improve a player’s mechanics or decision-making. That comes from repping footwork drills and… doing homework.

All that said, part of being a coach is accounting for the weaknesses of your quarterback and finding ways to maximize their production. Kingsbury failed to do that with Murray.

Murray’s production actually dipped throughout the course of Kingsbury’s tenure. And although Murray largely relies on his natural athletic ability, Kingsbury never figured out how to maximize that by getting him on the move, using play action, and scheming downfield shots.

Murray’s 11.5% attempt rate at 20-plus yards ranked 19th of 33 quarterbacks with at least 25 attempts. Murray averaged just 6.9 yards per attempt on downfield passes, ranking last among the 33 qualifiers. He also possessed the second-highest turnover-worthy rate. Murray also ranked 27th in play-action rate and only had 18 RPO dropbacks in his 11 starts.

Apparent fighting between Kingsbury and Murray didn’t help the situation. There were a few very public, very loud spats between Murray and Kingsbury this season. It got to the point where they had a buffer between them at times, unable to communicate directly. And while Kingsbury has never been one to directly call players out, Murray’s body language and attitude become enough of an issue to discuss publicly.

Money and talent talk. The situation became untenable, and a relationship that’s dated back to when Murray was in high school devolved to a point of no return.

The Cardinals need someone with proven offensive success at the NFL level. They spent a ton of money on Murray and need to figure out how to make that work if they are to have any success over the next few seasons. If they can’t find offensive success at that point, they might be looking for a new QB sooner than expected.

Ultimately, the Cardinals are a disaster. Kingsbury was never a good hire to begin with. He was fired at Texas Tech after finishing 6-6 and going just 35-40 during his six seasons coaching the Red Raiders. Yet somehow, he failed way up, becoming an NFL head coach immediately following his college-level failure.

Arizona has found some success in the past but has been underwhelming since Bruce Arians retired and then subsequently unretired, possibly seeing the writing on the wall that the Cardinals’ roster was in shambles.

The abhorrent roster-building since Kingsbury’s arrival didn’t help his cause. However, he failed in the one task Michael Bidwell bestowed upon him. He never found a way to make his offense work in an offense-driven league.