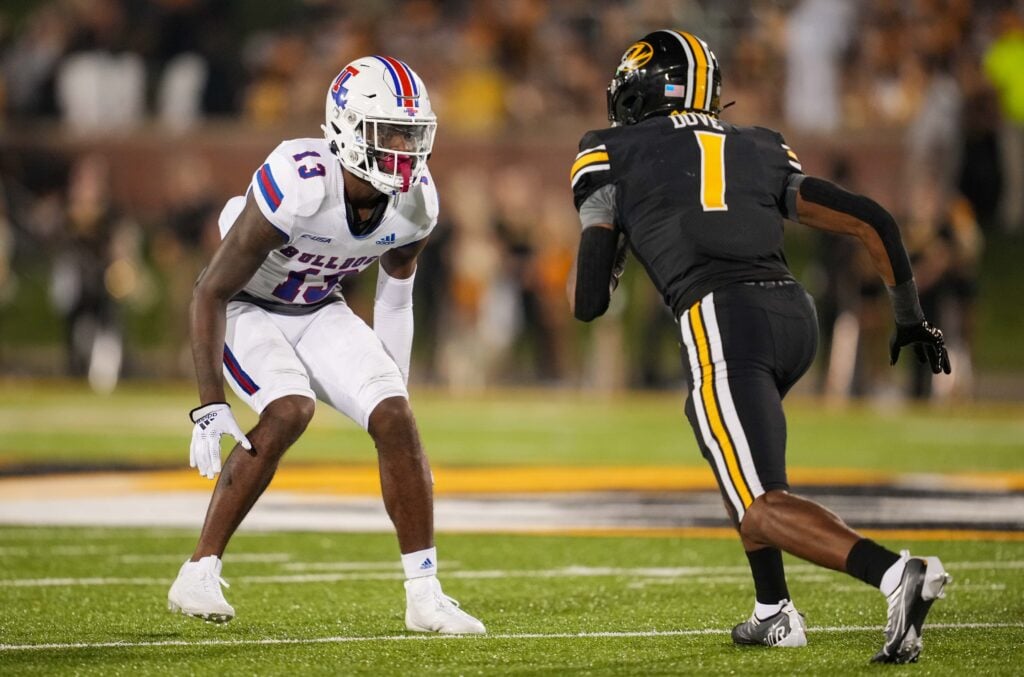 One doesn’t always expect top-tier athletic talent to come from the Group of Five ranks, but Louisiana Tech CB Myles Brooks breaks the mold with his 2023 NFL Draft scouting report. A sudden emergent in 2022, Brooks could play spoiler in a strong CB group.

If you’re just hearing Brooks’ name for the first time, don’t feel out of the loop. 2022 was Brooks’ first season at the FBS level, after spending three seasons as a cornerback for Stephen F. Austin.

SFA wasn’t Brooks’ first choice out of high school. The three-star cornerback and safety recruit, who had a documented 4.56 40-yard dash and a 40.7″ vertical at the time, had originally committed to Arkansas. But late in the 2019 cycle, Brooks de-committed from Arkansas and instead chose to stay in his home state of Texas, signing with SFA.

Three years flew by, and across that span, Brooks began to show promise as a defensive playmaker, accruing six interceptions and 17 pass deflections. His success led to a new FBS opportunity at Louisiana Tech in 2022, and Brooks took full advantage of it.

Brooks distinguished himself as one of the best coverage defenders in C-USA this past season, racking up three interceptions and eight pass deflections in a campaign that earned him second-team All-Conference honors. This breakout seemed sudden, but it was a long time coming for a talent like Brooks. And he’s rising up boards because of it.

There are still a few things for Brooks to clean up on tape, but he grades out as a potential Day 2 talent in the 2023 NFL Draft. In a deep CB class, it’s entirely possible that he slips into the early Day 3 range. But he has the tools to be a potential steal for the right team.

Brooks emerged on the NFL Draft radar with a breakout 2022 campaign. He has the production to back up his profile, but on tape, he also boasts many of the desired qualities in a boundary cornerback.

Brooks is long, athletic, and physical, with more than enough fluidity and short-area athleticism to hold his own in matching situations. He flashes patience and discipline with his press technique and quietly has some of the best ball skills in the 2023 NFL Draft.

Playing lower and more composed in his stance will be an area of emphasis for Brooks in the pros. And while he’s a stellar coverage player, his run support leaves plenty to be desired. Despite having translatable length and explosiveness, Brooks is inconsistent in getting off blocks and converting as a tackler.

He’s an imperfect prospect, but Brooks has the unteachable tools you want to build around at cornerback in the modern NFL. He’s explosive and agile, with enough long speed to carry downfield. He can dictate reps in press with his length and proactive physicality, and he’s also flashed the necessary processing skills to react quickly in off-man and play space in zone.

At his maximum, Brooks can be a quality starting cornerback on the boundary with some scheme versatility — with a particular affinity for press-man, press-bail, and zone alignments — and his elite ball skills serve as the cherry on top.