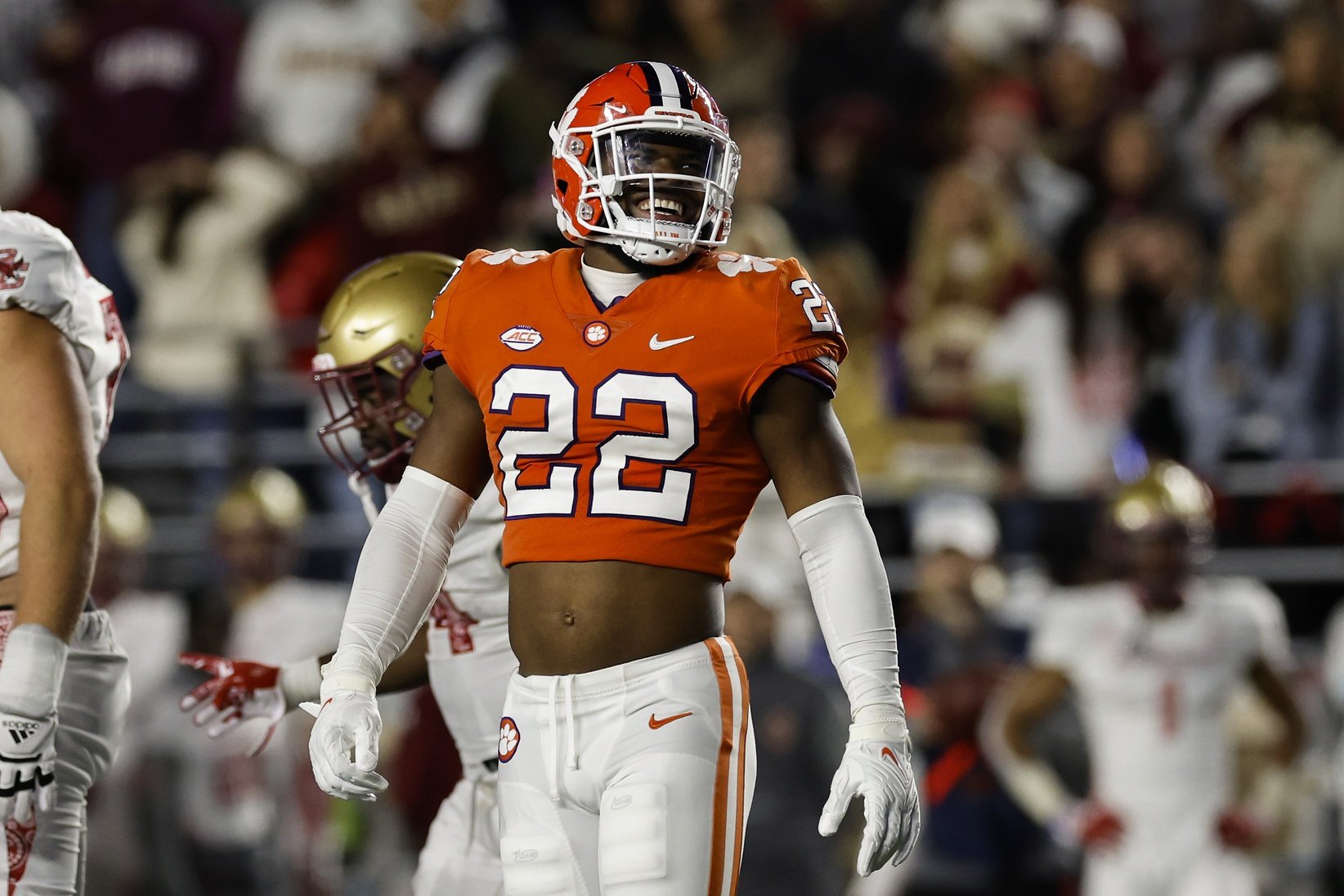 While analytics will tell you selecting linebackers in the first round of the NFL draft doesn’t maximize value, you can’t deny the talent. And in the 2023 class, there is at least one player worthy of a selection in Round 1. With the 2022 regular season firmly in the rearview mirror, let’s revisit the top 10 linebackers in the 2023 NFL Draft.

Don’t let DeMarvion Overshown’s abundance of white armbands distract you from his dynamic play from the second level. Overshown is fresh off his best season for the Longhorns, which coincided with his increase in snaps along the defensive line and from the slot.

At 6’4″ and 224 pounds, the Texas LB will certainly have his fair share of issues against the run as a stack defender. His length, speed, and agility are valuable, but his lack of mass and tackling inconsistencies are thorns in the side of his profile.

Nevertheless, as fellow PFN Draft Analyst Ian Cummings said last season, “[Overshown] isn’t quite there yet, and it’s not guaranteed that he ever will. But the potential is impossible to ignore.”

After starring for Miami (OH) last season, Ivan Pace Jr. transferred to Cincinnati to reunite with his younger brother Deshawn and improve his draft stock. He’s had his issues in coverage and with penalties, but don’t let that distract you from his dominance in the box.

Coming downhill is where Pace thrives, blowing up linemen and wreaking havoc in the backfield. Cincinnati has unleashed him as a pass rusher from the middle, allowing him to shoot through gaps and bring down the QB (10 sacks). What Pace lacks in size (6’0″, 230+), he makes up for with pure energy and aggression.

At 6’5″ and 246 pounds, Jack Campbell is a force in the middle of Iowa’s vaunted defense. He’s one of the most consistent and seasoned defenders in the 2023 NFL Draft, making his projection effortless.

Campbell has the length to wrap up tackles, shed blocks, and disrupt passing lanes. Plus, he moves like a more diminutive player in space, with the short-area quickness and read/react ability to close on the ball. There are more athletic and imposing LBs in the class, but teams will covet Campbell’s no-nonsense skill set.

Need a rangy linebacker to patrol the field? Mohamoud Diabate could be your man. The Florida transfer starred for Kyle Whittingham’s defense as a traditional off-ball LB just two years removed from playing a primarily DE role with the Gators.

Diabate’s still going through growing pains in zone coverage, when shedding blocks, and when tackling in space. Nevertheless, his athletic profile and improvements year over year are promising. If he can clean up those inconsistencies to pair with his excellent burst and length, Diabate could pose a nuisance for opposing offenses.

When discussing Daiyan Henley as a draft prospect, you have to begin with the fact that he’s only played linebacker since 2020. Prior to his junior year at Nevada, he lined up at QB, WR, EDGE, safety, and kick returner. All that tells us is he’s versatile, athletic as can be, and one heck of a team player.

Now, Henley’s inexperience at LB shows at times, and he is a bit light at inside linebacker. But there’s no denying his sideline-to-sideline range, gap penetration, and upside in coverage. With some seasoning and experience, Henley can continue his production at the NFL level.

In October, PFN Chief Draft Analyst Tony Pauline highlighted Tommy Eichenberg as a draft riser. And that’s all he has done since bursting onto the scene in 2021: rise above expectations. Eichenberg is a high-powered CPU at middle linebacker, sniffing out both pass and run plays.

He’s also proven to be an effective blitzer with the requisite abilities to fly around the field in all facets. Entering the year, the biggest critique on Eichenberg was he only had four starts under his belt. Well, with 13 starts this season, there are few glaring holes in the Ohio State LB’s profile.

There is a pretty steep drop-off from the top three LBs in the 2023 NFL Draft. But that’s more of a testament to them rather than a knock on the rest of the class. Henry To’oTo’o is an NFL-caliber athlete and has flashed the processing skills to earn Day 2 consideration.

Still, the Alabama LB can be slow to react at times, although his raw athleticism has made up for many deficiencies. Additionally, his size (6’2″ and 228 pounds) limits his ability in tight spaces and when blocked by larger linemen. To’oTo’o’s best utilized with room to operate, where his tools and creativity shine.

The Sewell family has already produced two NFL players, including former top-10 pick Penei. And they aren’t done yet. Noah Sewell is a well-built 6’2″ and 250+ pounds. But what’s more impressive is how Sewell uses his size. He rattles ball carriers with bone-shaking hits over the middle and downhill.

Sewell’s trigger, overall athleticism, stack-and-shed ability, and instincts are plus traits. But there’s one word that describes him best: explosive. Give Sewell a lane, and he’s running whoever is foolish enough to stand in his way.

Drew Sanders transferred from Alabama to Arkansas last offseason, and he has looked like a completely different player. I don’t mean physically; Sanders switched from an on-ball linebacker with the Crimson Tide to off-ball in Fayetteville.

That versatility only boosts Sanders’ stock, who has the physical tools to operate as a stack linebacker while also generating pressure as a blitzer or occasional EDGE. It may take a creative defensive coordinator to unlock his maximum upside, but the skill set is there to mold him into a three-down defender.

“Trenton Simpson, no matter what.” That’s what every LB-needy team should have on their big board. Even labeling Simpson an LB is a disservice to the defensive weapon that he is.

The Clemson playmaker has the coverage fluidity of a safety, the speed and power of an edge rusher, and the instincts of an orthodox linebacker. Overhang, along the defensive line, in the box, in the slot, or even safety — Simpson can do it all.