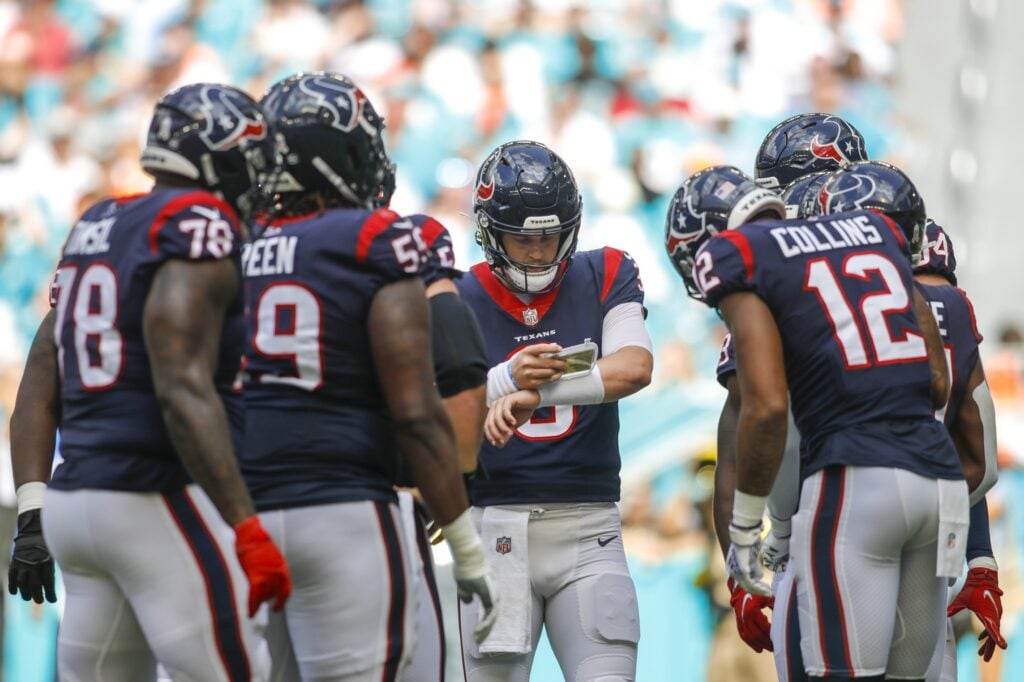 As the season continues to move along, the playoff picture begins to solidify. With the NFL standings becoming more definitive, teams will slowly start to see themselves from the outside looking in.

NFL Teams Eliminated From Playoffs in 2022

The Houston Texans were the first NFL team to be eliminated from playoff contention in 2022. Expectations were not very high for this Texans team when the season started. Before Davis Mills could even take his first snap under center this year, oddsmakers gave Houston the lowest win total on the board at 4.5 in most places. With only one win on the year so far, their chances of going over that number are nearly nonexistent.

Although most people had little faith in this team, they did try to prove everyone wrong with a competitive start. They managed to finish their first game with a tie against the Indianapolis Colts, 20-20. They remained competitive in their next three games, although they all ended in losses. Then, in Week 5, they finally managed to get their first win by defeating their NFC South rivals, the Jacksonville Jaguars.

Unfortunately for Texans fans, they lost every game after that Jaguars win.

Before we look at what went wrong, let’s look at some of the positives from this year. The emergence of rookie running back Dameon Pierce is the obvious high point for the Texans. After being selected in the fourth round (107th overall), Pierce fell into the best possible situation with little competition surrounding him. He made the most of his opportunity and is on pace to surpass 1,000 rushing yards in his first NFL season.

Now, let’s look at some of the bad. Davis Mills is clearly not the answer for this team at QB. He has regressed immensely compared to last year, and Houston benched him against the Browns for backup Kyle Allen. With Mills under center, the Texans were last in the league in yards gained, averaging less than 200 yards and 15.8 points per game.

Now that they have mathematically been eliminated from the playoffs, they can get an early start on the 2023 NFL Draft.

Another team coming into the year with very few expectations was the Chicago Bears. With a new head coach and regime installed, this year was widely regarded as a “let’s see what we have” opportunity. QB Justin Fields had shown flashes the season before, but there were still a ton of questions surrounding the young signal-caller.

As the season progressed, it was obvious that the Bears were already looking ahead to next year. They sold off some pieces ahead of the deadline, including Roquan Smith, who was an integral part of the defense. However, on the bright side, they do seem to have figured out the QB situation for the future.

Although Fields struggled to start the season, he has gotten significantly better as the weeks progressed. He has shown that he can be a threat with both his arm and legs. Fields has rushed for over 75 yards five times this year, including two games with over 150 yards.

And although their record might not indicate it, Fields has kept this team competitive. Unfortunately, at 3-10, their playoff chances are officially no more. Yes, they were already on life support, but their Week 13 loss to the Green Bay Packers 28-19 was their final nail in the coffin.

It is a tough loss for Bears fans. Not only did Aaron Rodgers continue his infamous “dominance” over this Chicago squad, but the Packers actually overtook the Bears as the winningest NFL team of all time. The Packers now have 787 wins in franchise history, while the Bears have 786. As recently as 1991, Chicago had 85 more wins than Green Bay.

Well, the first year of Russell Wilson in Denver ended with a whimper this week. It took only until Week 14 for this Broncos team to mathematically be eliminated from the NFL playoffs.

It was a disappointing first season for Wilson, with the team averaging under 14 points per game. That was in large part thanks to Wilson’s inability to move the ball downfield, combined with his struggles in the red zone. Needless to say, this was not necessarily what the organization hoped for when they basically mortgaged their future to acquire the QB during the offseason.

On the plus side, Denver’s defense has been elite this year and should give hope to their fans for the future. They have surrendered the second-fewest points per game (17.0) in the league and gave up the fewest yards per completion (5.9).

There are going to be a ton of questions surrounding this team during the offseason, including what they should do with first-year head coach Nathaniel Hackett. Hackett has clearly struggled this season, and it will be a surprise if he returns as Denver’s coach next year.

The Cardinals have officially been eliminated from playoff contention. It has been a difficult year for the NFC West squad, with the offense struggling to find any sort of consistency. WR1 DeAndre Hopkins missed the first six games due to a suspension. The rest of the WR core missed time as well, and the final nail in the coffin was the season-ending injury to QB Kyler Murray.

Now, the team will need to regroup and reevaluate for next season. There have already been murmurs that head coach Kliff Kingsbury was on the hot seat before the team was officially eliminated. With Kingsbury being considered an offensive “genius,” the lack of success the team has had during his tenure makes it hard to imagine a world where he is still in Arizona next season.

But this is not all on the offense. The defense also struggled, and with everyone on the roster getting one year older, including star J.J. Watt, the team will need to look to the draft to try and fill some holes.

The NFC West become much more clear after this week, with both the Rams and Cardinals officially being eliminated from playoff contention. The Rams had an eerily similar season to the Cardinals. They suffered from a ton of injuries throughout the year and lost their starting QB Matthew Stafford to injury. Their rotating door of starting QBs finally led to free agent Baker Mayfield taking over the reins.

The Rams have showcased one of the worst cases of the Super Bowl hangover in NFL history. The dropoff from last year to this year has been unbelievable, and now, there are questions surrounding the entire aging roster. There were rumors of a potential retirement for both star Aaron Donald and head coach Sean McVay before the season even started.

Will those guys both look to walk away from the game after this terrible season? Maybe. What makes things even worse for the team is the fact that they have basically mortgaged their future for the Super Bowl they won last season. With very little draft capital moving forward, a complete reset is going to be tough to accomplish.

Although they put up a heck of a fight, the Indianapolis Colts have ultimately been eliminated from playoff contention. After giving up a 33-point lead to the Minnesota Vikings, the Colts could do nothing but watch as their playoff hopes diminished Thursday night when the Jacksonville Jaguars defeated the New York Jets in Week 16.

It has been a year to forget in Indianapolis. After bringing in Matt Ryan during the offseason, expectations were high as the team tried to replicate the success they found when they brought in an aging Philip Rivers. Unfortunately, they could not catch lighting in a bottle twice.

Ryan has been disappointing. But it is not all his fault. He has had little help from what was once an elite offensive line, and the rushing attack has taken some significant steps backward. Regardless, ahead of their matchup this week, it was announced that Ryan would once again be benched and Nick Foles would take over as the starter for the remainder of the year.

The team fired their head coach Frank Reich in the middle of the season and then shocked the world by bringing in Jeff Saturday to replace him. Although Saturday did a better job than many expected, it wasn’t enough to make this team competitive. Who will be calling the plays next year? Who will be under center? Can Jonathan Taylor return to form? These are all questions that the Colts will have to address in the offseason.

NFL Teams on the Verge of Being Eliminated From the Playoffs