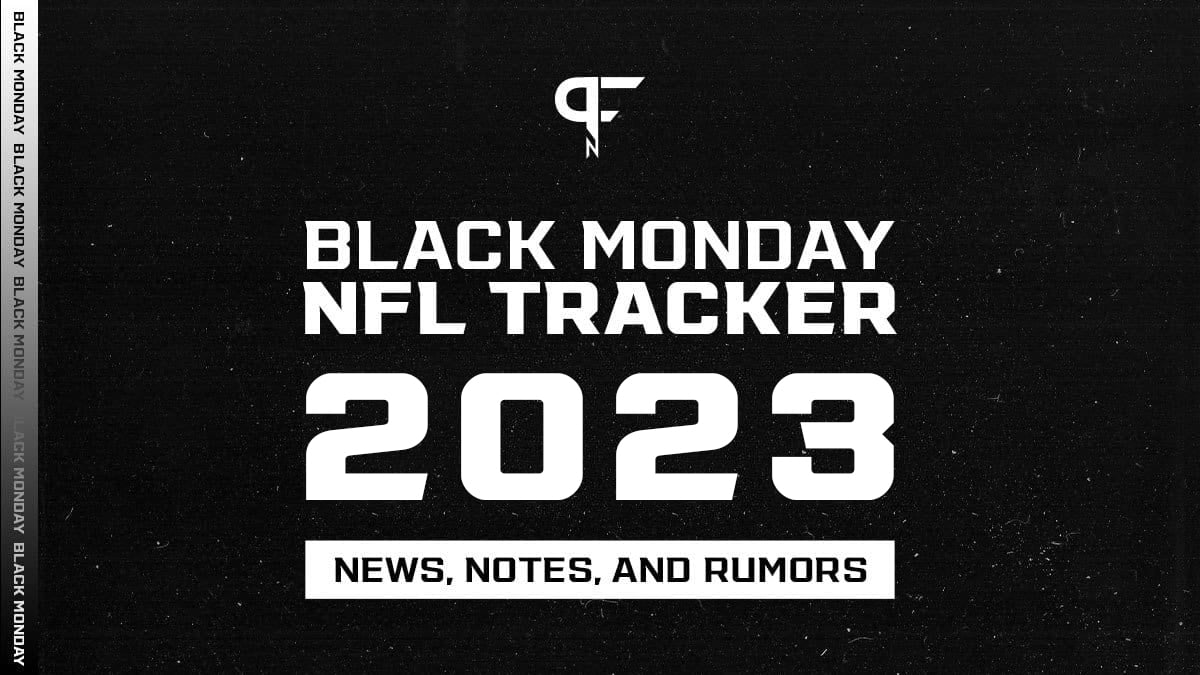 Black Monday is a sobering day in the NFL — coaches are fired, families will be uprooted, and changes are made throughout organizations across the league. We’ll be bringing you the latest NFL news and rumors as they happen, so keep coming back throughout the day. The information below is current as of 10:42 a.m. ET.

All eyes are on the Arizona Cardinals and what happens with head coach Kliff Kingsbury. Cardinals Owner Michael Bidwill will hold his year-end meeting with Kingsbury this afternoon. We’ll have more information at that time.

The Atlanta Falcons have named Greg Beadlers their new president. Rich McKay will remain CEO of the Falcons with continued oversight over football operations. Additionally, he will assume CEO duties for AMBSE, the parent company of the Falcons, Mercedes-Benz Stadium, and MLS Atlanta United.

On Monday morning, the Cleveland Browns announced that they have relieved defensive coordinator Joe Woods of his duties. The Browns gave up 331.5 yards per game and 22.4 points per game, which ranked them about the middle of the pack in the league.

In a statement released by the team, head coach Kevin Stefanski said, “I’d like to thank Joe for his hard work and dedication in his three seasons as our defensive coordinator. I will always have the utmost respect for Joe, the person, and the coach. Unfortunately, we didn’t perform up to our standards enough this season, and we all share in that responsibility. We all wish Joe and his family the best in the future.”

But all eyes will be on Sean Payton. Multiple reports, including this one from NFL Media’s Ian Rapoport, state that the Broncos have received permission from the New Orleans Saints to interview Payton for their head-coaching vacancy. Further, the two teams appear to understand and agree on what the trade compensation would look like. NFL rules state that Jan. 17 is the first date an in-person interview would be permitted.

There is no deal in place, but the Broncos are expected to meet the Saints’ asking price, which is rumored to be a first-round draft pick and more. Conversations are at their initial stages between the Broncos and Saints, but a prerequisite for the Saints granting permissions to teams to interview Payton was that the other team would need to agree to the compensation first.

Since Payton is under contract with the Saints, New Orleans controls his rights and, thus, will be a major player in the Payton sweepstakes. Here’s more on Payton and his coaching career.

Late Sunday evening, the Houston Texans announced that they fired head coach Lovie Smith. Smith follows another one-and-done head coach in Houston after David Culley was fired after the season last year. Houston was 3-13-1 under Smith, including a victory over the Colts in Week 18 that saw them lose the number one pick in the 2023 NFL Draft. Here are our top five candidates to replace Lovie Smith in Houston, with Eagles defensive coordinator Jonathan Gannon an early favorite to land the job.

According to ESPN’s Adam Schefter, McVay’s future with the Rams is in doubt. Sources tell Schefter that McVay will take some time after Sunday’s regular-season games against the Seattle Seahawks to figure out if he will return for the 2023 season.

McVay has had several personal and professional circumstances arise in the past year, all of which are weighing on him during this process. McVay, at just 36 years old, would likely stun many by walking away.

FOX’s Jay Glazer said that many in the organization expect McVay to leave, and it won’t take too long after the conclusion of the regular season.

After winning the Super Bowl last year, the Rams were hit with a slew of injuries and do not have a first-round draft pick for the next several years. Plus, they are up against the 2023 salary cap, and changes to the coaching staff are expected. All of this will be in play as McVay considers his future.

If McVay walks away, the Rams will control his rights through the end of his contract, which is the end of the 2026 regular season.

In a press conference earlier this morning, Bill Belichick announced that he’ll be back for his 24th season as the head coach of the New England Patriots. Belichick did not offer any hints about the future of his coordinators, especially on the offensive side with Matt Patricia and Joe Judge.

“Every decision that we’ve made has always been with the intent to do the best thing for the football team,” Belichick said. “That’s the way it’s always been, and that’s what it will be going forward,” he said. “At different decision points, you have different opportunities. As those go along, or come along, we’ll continue to evaluate them.”