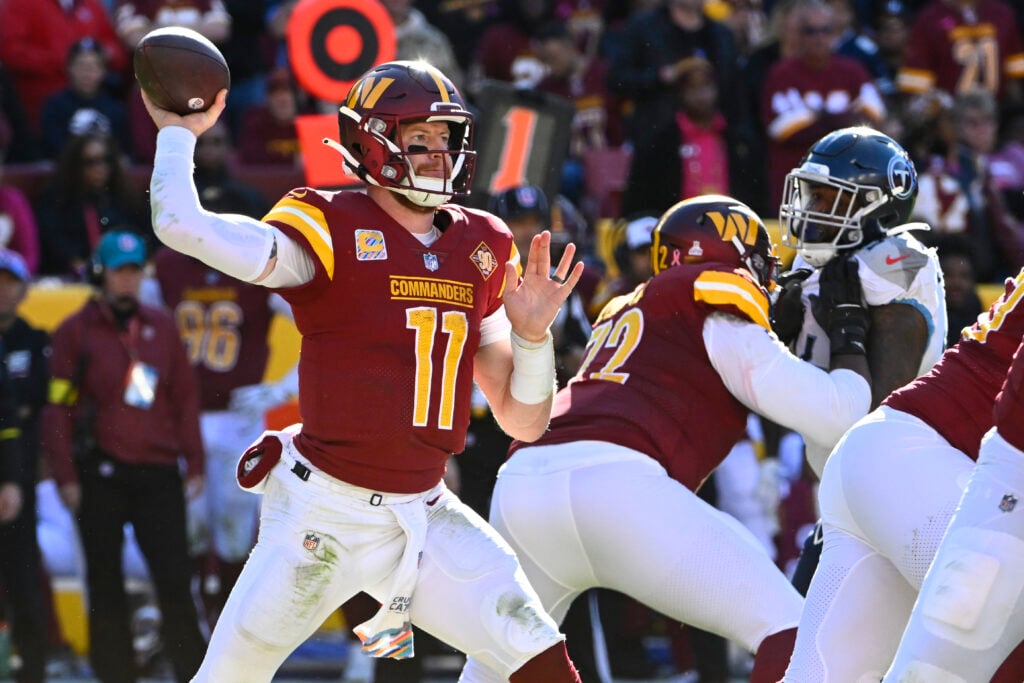 Ron Rivera named Carson Wentz the starter for Week 17 against the Cleveland Browns. The question is, is that the right decision for the Washington Commanders? Wentz came into their Week 16 matchup against the San Francisco 49ers in the fourth quarter and had a nice outing, but a Commanders’ comeback was well out of reach by that time.

Commanders With and Without Carson Wentz

Carson Wentz was 2-4 as the Commanders’ starter for the first six weeks of the season. Their defense hadn’t yet turned things around, which was a big reason for their mid-season turnaround, even though Taylor Heinicke received credit for their winning streak. That’s the way quarterbacking goes; team success or failure is a quarterback’s individual success or failure.

So let’s look at how the offense faired with Wentz on vs. off the field, by the numbers.

The passing attack would be a better indicator of who should be the starter moving forward. For a while, the passing attack was undeniably better with Heinicke, but his performance has crashed back down to earth, as his magical powers can only carry his lack of physical ability so far.

Washington’s passing attack has seen slightly better results with Wentz than Heinicke, although both have produced negative EPA results throughout the course of the season. However, Heinicke’s EPA+CPOE composite score is higher than Wentz’s, meaning that Heinicke has been the more accurate passer.

The good news for Washington fans? Deshaun Watson, who Washington considered at some level before trading for Wentz, has been even worse since his return from suspension.

Carson Wentz Has a Shot at Redemption

Last season as the Indianapolis Colts QB, Carson Wentz was part of one of the most epic two-game collapses we’ve seen. Before their Week 17 matchup against the Las Vegas Raiders, the Colts had a 97% chance to make the postseason. Even with a loss to Las Vegas, all they had to do was take care of business against the Urban-Meyer “led” Jaguars.

The Colts lost both games, with the latter being in embarrassing fashion against a Jaguars team that received the top pick in the draft even after their Week 18 win against the Colts.

If Wentz can rise from the ashes of having his job taken from him by Heinicke to lead a late playoff push, it would be the first in rehabilitating his reputation. Conversely, a poor performance could effectively make this his last hoorah as a starting QB in the NFL.

Yes. As ugly as things were for the Washington offense with Wentz at QB, it’s been worse recently with Heinicke, even with the improved rushing attack. It appears Rivera and the offensive staff took an analytical approach to this decision. And while Wentz’s upside is largely forgotten at this point of his career, there’s a chance it remains.

That doesn’t exist with Heinicke.

No matter how these final few weeks play out, the Commanders must look for an upgrade at QB somewhere in the offseason. If they want to compete in the NFC East, they must get better play at the position because they can count on Jalen Hurts and Dak Prescott to be productive at this point.