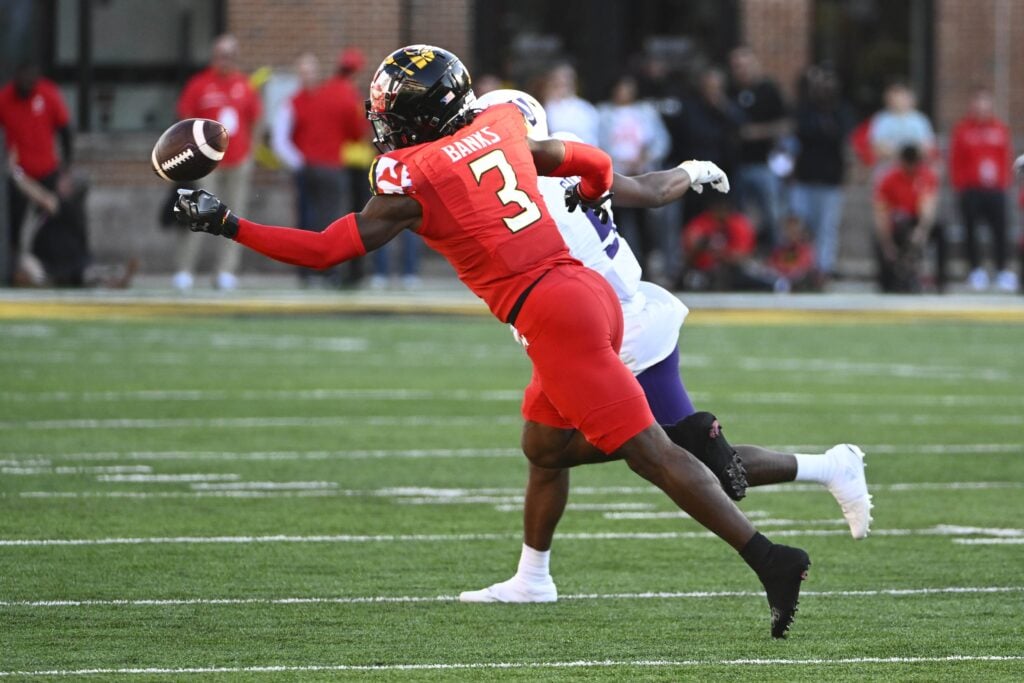 The 2023 NFL Draft CB class has been revered for its strength all year, but the scouting report of Maryland’s Deonte Banks is seldom mentioned. After declaring early, does the Terrapins defender have the traits to potentially be a factor in the early rounds? Let’s discuss.

Playing football for the Terrapins was always a dream for Banks — who hailed from Edgewood High School in Edgewood, Maryland. He achieved that dream in 2019, signing as a three-star recruit. And as a true freshman, he flashed almost immediately.

In his first season, Banks logged eight starts in 11 games, notching his first pick against the Michigan State Spartans in late November. And in a truncated 2020 season, he maintained his part-time starting role, earning more reps in a talented Maryland DB room.

In 2021, Banks faced a type of adversity he hadn’t faced before, suffering a season-ending shoulder injury early in September. The injury forced him away from the field when he wasn’t ready to leave, but he’d be back soon enough. And when he returned, he came back with a vengeance.

2022 served as Banks’ triumphant return to not only the football field but to the 2023 NFL Draft discussion. He started full-time on the boundary alongside Jakorian Bennett, notching a pick and eight pass deflections in a season that earned him honorable mention All-Big Ten recognition.

Cornerbacks with size and athleticism have always been coveted, but in the modern NFL, that combination has grown invaluable. Banks is another 2023 prospect who brings just that.

At 6’2″, 205 pounds, Banks has a lean, compact frame with good mass and above-average length. He might not be quantifiably elite in any athletic area, but he is exceptional across the board, with his short-area mobility and burst at the center of his profile.

As an athlete, Banks has enough accelerative capacity to turn and run with receivers upfield, sticking to the hip pocket. Additionally, he flashes great explosiveness upfield out of stacked transitions, and he’s a very free-flowing athlete for his size.

Moving vertically, Banks has enough long speed to avoid being stacked by long-striders. But closer to the line, he also has the hip fluidity to quickly sink and redirect forward in response to out-breaking routes. In fact, Banks’ fluidity is one of the strongest areas of his game.

With his elastic, oily hips, Banks is able to quickly transition from inside leverage to outside response. He has the recovery athleticism and fluidity to quickly transition and regain positioning after being worked off-center by initial fakes. The Maryland CB can undergo up to 270-degree transitions with ease, swiftly aligning and carrying acceleration out of transitions.

Banks is a very smooth athlete but also shows off high-energy movement in close quarters. The Maryland CB has a visible quick twitch out of his stance and impressive foot speed for his size. He can use that foot speed to aid sharp direction changes and swivel around with ease, and he’s an explosive short-area mover who can match WRs with active, successive bursts.

Banks’ technique is still a work in progress, but there are plenty of promising signs on tape. The Terrapins cover man has shown he can use feet first in press and align his hips to squeeze receivers against the boundary. He stays square off the line, generally plays low in his stance, and uses active feet to match receivers off releases. To that end, he flashes patience and discipline with his feet and can gather WRs with successive jams.

Expanding on Banks’ applied physicality in man coverage, the Maryland CB can use inside jams to claw WRs’ hands away and pinch them against the boundary while flipping upfield. Farther along in reps, he actively uses his length to wall receivers to the boundary while maintaining his stride. And at the line, he proactively uses two-hand jams to shock larger receivers and delay releases.

Banks’ visible processing as a defender is another cause for optimism regarding his projection. Banks shows exceptional response to stimuli on quick route breaks. He can quickly recognize receiver intent and flip his hips in response, and he flashes phenomenal diagnosis ability and adaptability when tracking routes in off-man.

Pre-snap, Banks has shown he can process motions, communicate with teammates, and rotate coverages. And in zone, he can carry and pass off WRs, playing with good spatial awareness. With his active play recognition, he calls out familiar formations and can clamp down on screens.

At the catch point, Banks’ vertical athleticism and length give him a natural edge. But beyond that, he’s shown he can follow a WR’s eyes and obstruct the throwing window with his length when passes approach. He can track the ball over his shoulder in tight situations, disrupt with authority, rise vertically, and high-point lofted throws.

Banks is up-and-down in run support, but once again, his physical traits provide upside here. He has the play strength to shed solo blocks on the boundary. He can latch with his length and rip down opposing anchors after squaring up. Moreover, he’s shown he can peek outside around blocks to bait blockers, then wrench back inside and clog running lanes.

Banks should test very well at the NFL Combine, but in a league with elite athletes at the top, his athletic tools may be a tick below the elite mark.

Having considered all this, Banks’ athletic foundation is superb overall. But where the Maryland CB can stand to improve is with his technique and applied physicality. At times, Banks can do a better job dictating reps with his length, as he sometimes plays passively and gives too much space. On the flip side, he can be caught tugging on frames when attempting to recover.

Going further with Banks’ technique, the Maryland CB sometimes loses his balance on quick transitions, and he will occasionally tug himself upright at the end of his backpedal. On a related note, his plant-and-drive footwork out of his backpedal can be more efficient and composed.

On occasion, Banks plays a bit too tall at the line and can be tugged back past his center of gravity by forward releases. At the line, his timing of jams can improve. The Maryland CB sometimes gets caught flat-footed and extends prematurely, lurching and losing balance.

With his feet, Banks can be a bit uncontrolled and imbalanced, as early, panicked extensions can cause him to lose synergy. He also loses his balance when attempting to accelerate through stems at times, sometimes delaying his response at the catch point. Meanwhile, in off-man coverage, Banks sometimes gives too much cushion and is indecisive at stems.

Banks has functional ball skills, but he can be more consistent at getting his head around in coverage downfield. His hand precision and strength at the catch point can improve, as he can be outmuscled by larger receivers.

In run support, Banks sometimes lacks urgency when adjacent to plays and will, at times, fade away when obstructed by blocks. He can be late to recognize runs breaking outside, and he sometimes approaches tackles too upright, diluting his play strength.

After his breakout 2022 campaign, Banks projects as a potential top-100 prospect and Day 2 selection in the 2023 NFL Draft. With the CB class being as deep as it is, there will be competition. But Banks has the tools to warrant interest within the first three rounds.

The top selling point with Banks is the same as it is with many other cornerbacks. He’s a plus athlete with good size and length. But the brand of Banks’ athleticism could give him a boost in some evaluators’ eyes.

While some size-speed athletes are incomplete, Banks has a little bit of everything. He’s reasonably explosive with enough long speed to work with. He has fast feet and a quick twitch at the line, and he’s very fluid transitioning with receivers.

Overall, Banks is an incredibly smooth athlete with length and physicality, and he’s shown promise with his technique and processing ability. He can employ feet first and maintain discipline, and in zone, he’s flashed solid spatial awareness and playmaking traits.

Banks’ man technique needs to become more consistent, but he has the athletic tools and temperament to eventually become a scheme-versatile starter on the boundary with additional development.