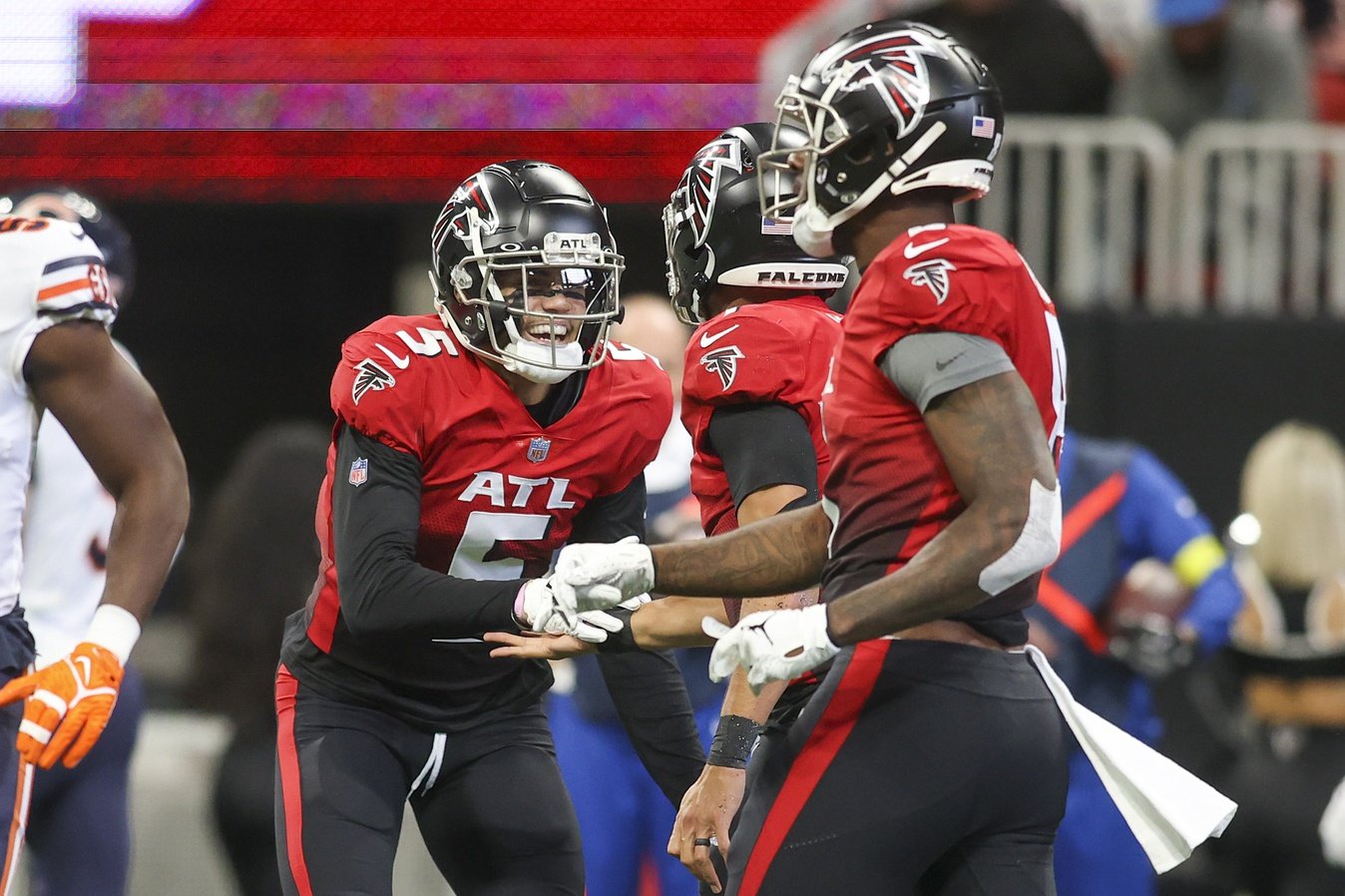 If you enjoy making NFL bets on player touchdowns, then welcome to our Week 17 rundown of favorite anytime TD scorer predictions. Six of the eight anytime TD scorers I recommended last Monday hit paydirt over the weekend: Josh Allen, Devin Singletary, James Cook, Derrick Henry, Jerick McKinnon, and Rachaad White. In other words, if you’d bet on all eight, you would have won big.

We’ve analyzed each Week 17 game’s highest-probability scripts to assess the most likely outcomes, including which players are the best bets to reach the end zone. All prop bets are taken from DraftKings, FanDuel, or BetMGM.

Motivation plus talent plus weak opposing defense? I like it.

Tyler Allgeier has led Atlanta’s backfield in rushing attempts each of the past two games. Drake London has led his team in targets for three straight games. The Falcons are still in the playoff hunt.

They’re facing an Arizona defense that’s surrendered the third-most points. The Cards’ defense is also third worst in red-zone TD percentage, with opponents scoring touchdowns more than 67% of the time when they reach the 20-yard line.

Although rookie Desmond Ridder remains a work in progress, the Falcons’ two best (healthy) playmakers can carry them to victory. I’d bet on both Allgeier and London to score.

The Detroit Lions remain squarely in postseason contention, thanks in part to the Commanders and Seahawks joining them in the loss column this past weekend. Additionally, they get a favorable matchup against the 3-12 Bears.

Not that Chicago is an easy out. Far from it. Detroit barely escaped with a W when these teams last met in Week 10, when the Lions overcame a two-touchdown deficit in the fourth quarter.

MORE: Early NFL Week 17 Predictions and Picks Against the Spread

In that game, Amon-Ra St. Brown earned 11 targets. The rest of the Lions had only 14. It’s been more of the same ever since, even with Jameson Williams and DJ Chark healthy.

The Bears have given up the second-most points and the third-most yards per pass attempt. They’re also last in the league in sacks. Jared Goff should have the time and opportunity to connect frequently with his No. 1 receiver in a contest where Detroit should post three touchdowns or more. St. Brown is a great bet to score at least one.

Who’s tied for ninth in TE red-zone targets? Well, of course, it’s Cade Otton, because that’s the name of this section. But if I hadn’t written his name above, would Otton have been the first tight end to pop into your head? The fifth? 10th?

What makes Otton so uniquely valuable is that Tom Brady has leaned heavily into the short game this season. In fact, Brady is 48th among all quarterbacks in air yards per pass attempt (3.6). He averaged 4.3 last year. The year before that, 5.0.

As a result, the normally near-elite Mike Evans and Chris Godwin have regressed statistically, while a short-game weapon like Otton has flourished. The rookie TE has picked up 5+ targets in six of his last eight outings.

The opposing Panthers have a middling enough defense to compete and possibly win. But I’m banking on Brady getting a few red-zone opportunities, with Otton serving as a co-primary option.

The Jets drafted Geno Smith with the 39th overall pick in 2013. He was supposed to be the franchise’s next long-term starting QB, in the wake of the failed Mark Sanchez era.

Although it’s not fair to judge teams for passing on (in hindsight) elite talent, it is fair to point out that the Jets could have picked Le’Veon Bell, Keenan Allen, Travis Kelce, and any number of other high-impact playmakers available at pick No. 39. Instead, they saw in Smith a quarterback who could help restore greatness to a team that had reached the AFC title game as recently as 2009 and 2010.

Instead, Smith flopped, and after two years, the Jets turned to stop-gap Ryan Fitzpatrick, who enjoyed a career year throwing to Brandon Marshall and Eric Decker.

The Jets didn’t have the patience to stick with Smith — to build an offense around him. His top receivers as a rookie were the post-prime Santonio Holmes and Jeremy Kerley. The next year, he leaned on Decker, Kerley, and the post-prime Percy Harvin.

In essence, Smith was demoted at the worst possible time. We’ll never know if he could have helped turn that team — and his career — around.

Now, all these years later, he’s facing the team that drafted him and then abandoned him. In fairness, the Jets did what they believed was best for the organization, and Fitzpatrick’s strong play validated that decision. But Fitzpatrick was a rental. He didn’t elevate the organization beyond that season.

Athletes have long memories. I believe this game is personal for Smith. And with a shot at the playoffs on the line, I believe he’ll try to capitalize against an impressive defense that happens to have surrendered the third-most QB rushing touchdowns.