Fantasy football is more than just the weekly head-to-head games we’ve all grown to love. On Underdog Fantasy, managers can put their player-projection skills to the test by predicting player stats. Here are my top Underdog Pick’em plays for the Dallas Cowboys vs. Tennessee Titans Thursday Night Football pick’em contest.

Underdog Pick’ems allows fantasy managers to predict stats and fantasy-point totals for almost all fantasy-relevant players. You can make two picks that pay out 3x your entry fee or add more selections to your entry for higher payouts.

The levels are 3x, 6x, 10x, and 20x, progressing with each additional pick’em you add to your entry. Let’s take a look at this week’s Underdog Pick’ems.

When I first sat down to write this article this morning, this was Malik Willis. While I do think Josh Dobbs is an upgrade in passing ability, I’m sticking with my belief that the Titans don’t score a touchdown tonight.

I’ve been watching football for a long, long time. I’ve seen guys like Tim Tebow, Tyler Palko, and Ben Dinucci make starts. Willis is extremely athletic and has legitimate rushing ability. However, I can truthfully say I’ve never seen a quarterback less qualified to throw passes in the NFL.

Dobbs isn’t quite on that level, but he’s been in the NFL since 2017 and has thrown a total of 17 passes, completing 10 of them for 45 scoreless yards.

MORE: Who Is Josh Dobbs? Backup QB To Start for Tennessee Titans

The Titans are mailing this game in, resting a whole host of starters, including Derrick Henry. They will likely experience serious negative game script. I just don’t think they will care.

I’m expecting the Titans to run the ball, even when trailing because their sole objective is to just get out of this game healthy and focus on beating the Jaguars in Week 18 to win the division. They may not score a touchdown. And if they do, Dobbs, who has yet to throw one in his career, won’t be throwing one tonight.

This one feels like a gift. Ezekiel Elliott has rushed for a touchdown in eight consecutive games. This should not be offered as if it is a 50/50 proposition.

The reason I think we do have it available is because of the Titans’ elite run defense. While the Titans are normally a pass-funnel defense, I expect the Cowboys to have no trouble moving the ball on the ground tonight.

What makes the Titans’ run defense so great is the players. Well, about half of them aren’t playing tonight. Guys like Dylan Cole, Zach Cunningham, Bud Dupree, and Jeffery Simmons are all out, among others.

With Dallas favored by two touchdowns, they should have positive game script all night. I expect them to make this as easy on Dak Prescott as possible. When they inevitably get near the goal line, Zeke wants those touchdowns. He’ll get one.

I want to see what Malik Davis’ projections are set at because this game could be over by halftime.

Dallas is already playing it safe with what I believe is a very minor thigh issue for Pollard. If they have a three-score lead in the second half, don’t be surprised to see them pull Ezekiel Elliott from the game. That could give Davis the entire fourth quarter to himself.

We’ve also seen Davis in two games where Elliott didn’t play. He saw 10 opportunities in a blowout win over the Bears and five carries in a crushing loss to the Packers. Davis will get work if he is the RB2, and it could be more than he would on a normal week against a team actually trying to compete.

On the other side, I’m interested to see if we get projections for rushing attempts on Hassan Haskins and anything on Julius Chestnut. With the Titans projected to be trailing, conventional wisdom suggests they’ll have to throw. I’m thinking that may result in lower rushing-attempt projections for the running backs.

If I’m correct, I’ll be looking to take the higher on one or both backs, as I do not believe the Titans will alter their game plan based on the score. I think their plan is to just run the ball as much as possible — even without Henry — and get out of dodge.

On an unrelated note, I’m also interested in taking the lower on Dobbs’ passing yards, but that number isn’t up yet, either. Check back later in the day. Once the projections populate, I will finalize my pick’em entry slip and update this article.

I was anxiously awaiting the release of a projection on Davis to take the higher. Then I saw 31.5. Inasmuch as I do think Davis may get the entire fourth quarter to himself, this is just too high of a number.

Barring exceptional efficiency, Davis likely needs 6-8 carries to have a realistic shot at surpassing 31.5 rushing yards. In what will likely be a slow-paced, low-scoring affair, I don’t think Davis will see enough usage to get there without having the fourth quarter to himself. And even if he does close out the game, the Titans will know it’s coming, preventing him from doing much with his carries. 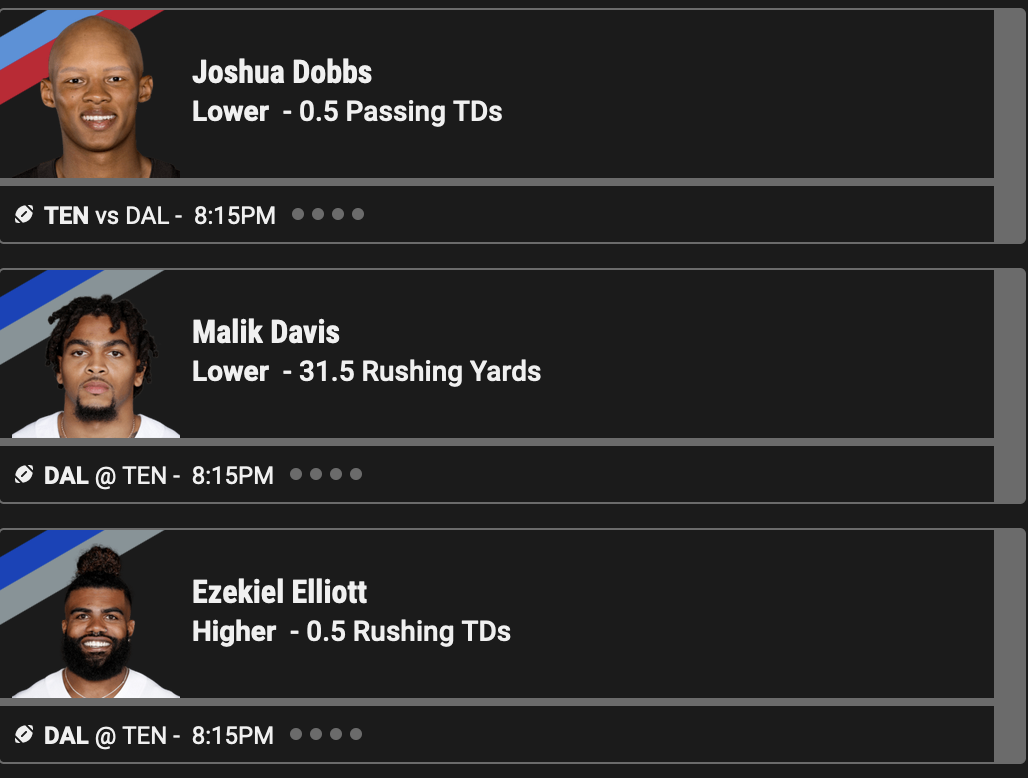