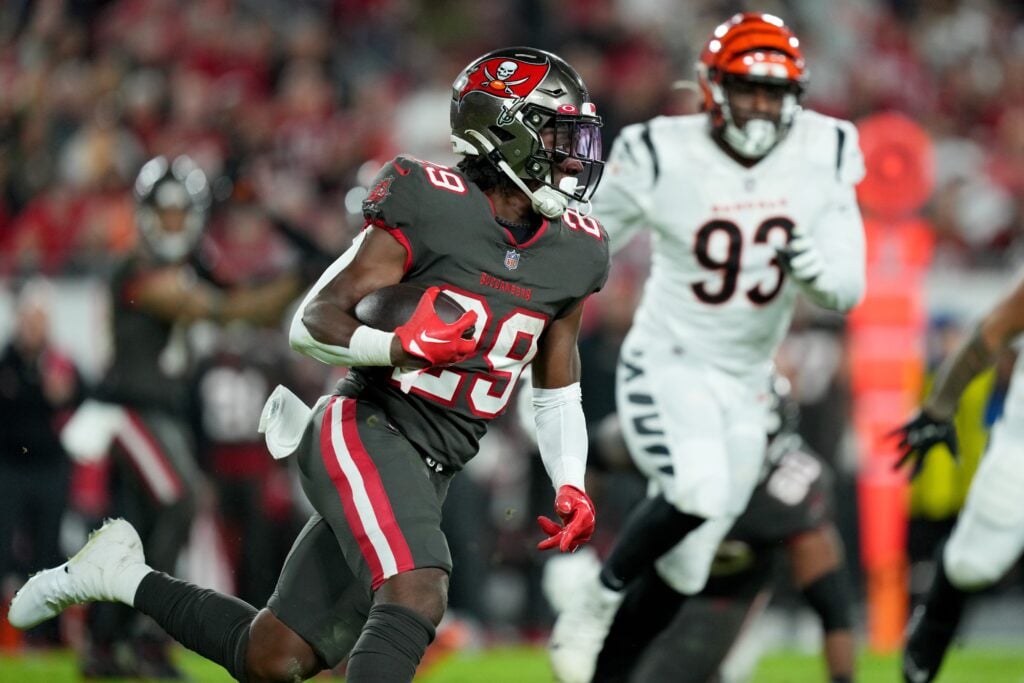 There are just two weeks of fantasy football left for most leagues, meaning those Week 16 start/sit decisions leave little room for error. With a shot at fantasy championships hanging on the line, there will be some intriguing decisions for fantasy managers. Unless one of your normal starters has a tough matchup, then it’s usually best to try and ride the guys that have got you here as much as possible.

In this article, we will look at fantasy points allowed to the position in the last four weeks and for the season as a whole in an attempt to determine start ’em and sit ’em options this week. Let’s examine the lineup credentials for the likes of Isiah Pacheco, Rachaad White, D’Onta Foreman, Gabe Davis, and Brandon Aiyuk.

For this article, we will mostly consider players who were started in fewer than 40% of ESPN leagues for our start ’em options and players who started in over 50% of leagues for our sit ’em options. This is not an exact science at this stage of the season, with eliminated teams still counting against the percentages but likely not changing their lineups on a weekly basis.

Additionally, this advice can also be used as research for Underdog Fantasy Best Ball drafts. These recommendations are based on data from half-PPR leagues, so they work well with the half-PPR scoring system that Underdog utilizes.

It was a tough call to start Geno Smith last week, and if you did so, you just about got away with it. With a score of 15.32 fantasy points, Smith was the QB15 on the week, which given the matchup, was actually somewhat of a positive outcome.

However, if you did bench Smith, then the matchup with the Kansas City Chiefs offers an opportunity for Smith to be a top-12 QB option all over again. At an average of 21.68 fantasy points allowed to the QB position, the Chiefs allow the fifth-highest score in the league this year.

Sticking with the game in Kansas City, the Chiefs’ running backs have a fantastic matchup this week. The Seahawks have been absolutely shredded by opposing RBs in recent weeks. They’ve allowed an average of 36.63 fantasy points to the position in the last four weeks.

Isiah Pacheco may have been started in 65% of leagues on ESPN last week, but his inability to really exploit a matchup with the Texans will have fantasy managers nervous. However, while Pacheco fell short of 10 fantasy points in half-PPR due to losing a fumble, he still led the backfield in carries.

Pacheco had 15 rushing attempts for 86 yards at an average of 5.7 yards per attempt. He also added a single reception for 11 yards. Without the fumble, Pacheco would have been a top-25 RB option coming out of the week.

Additionally, it’s close to impossible not to start Jerick McKinnon this week after coming off two huge performances. After seeing 15 opportunities in Week 14, McKinnon had 18 opportunities last week. Even without the two touchdowns in each game, McKinnon would still be looking at fantasy outputs over 15 in each of the last two games.

The Tampa Bay Buccaneers’ usage of their RBs has been frustrating for fantasy managers. Just when it looks like they are swinging towards one option, they appear to change course and utilize the other back more. Last week, we essentially saw an even balance of opportunities, with Fournette at 14 and White at 13.

It was always going to be tough for both Buccaneers’ backs to have value against the Bengals. Cincinnati had allowed an average of under 20 fantasy points per game in the past four weeks. With a fairly even split of touches and opportunities, it was always going to be a thin line for either to be a starting option in 12-team leagues.

However, this week, they face a Cardinals team that has allowed an average of 28.43 fantasy points per game to opposing running backs in the last four games. In fact, the Denver Broncos’ RBs scored a total of 35.2 half-PPR fantasy points this week, with both Latavius Murray and Marlon Mack finding the end zone.

The Cardinals have allowed 20+ fantasy points to opposing backs in six of their last seven games. During that period, they’ve allowed more than 25 fantasy points on four occasions. There is an opportunity here for both Fournette and White to finish the week as top-25 running backs in half-PPR formats.

If you drafted Gabe Davis this year, then you’re probably frustrated with him at this point in the season. Davis has not scored double-digit fantasy points since Week 11 and just twice since the Bills’ Week 7 bye. In the last five weeks, he hasn’t been able to turn an average of 5.8 targets per game into fantasy relevance.

Yet, things could change this week with a juicy matchup against the Chicago Bears. In the last four weeks, only one team has allowed more than the Bears’ 38.57 fantasy points to opposing wide receivers. In that period, the Bears have allowed over 30 fantasy points in all three of their games, providing plenty of opportunity for Davis to produce for fantasy managers this week.

Juwan Johnson, TE | NO at CLE

At this point, Juwan Johnson appears to be matchup-proof. He was dealing with an injury issue in Week 12, which limited him to just two targets. However, in four of his last five games, Johnson found the end zone and, with it, scored double-digit fantasy points in all four. He has become one of the top tight end options in the second half of this season.

After his performance last week, you are likely not rushing to get D’Onta Foreman back into your lineups. Furthermore, there should be next-to-no consideration given to starting Foreman in this matchup.

The Detroit Lions have allowed an average of 8.08 fantasy points to the RB position in the last four weeks. They haven’t allowed over 10 fantasy points to opposing running backs since Week 12, after having allowed it almost every week in the first 11 games.

Brandon Aiyuk, WR | SF vs. WAS

Brandon Aiyuk had become a player we could largely rely on from a fantasy perspective as a fringe Flex option when Jimmy Garoppolo was under center. However, in the two games that Brock Purdy has been the starting QB, he’s struggled.

Across the two games, Aiyuk has just seven targets with four receptions, 76 receiving yards, and a touchdown. The touchdown saved Aiyuk’s fantasy performance in Week 14, but without it, he would have put together three-straight performances with under 10 fantasy points in half-PPR formats with Purdy as the main QB option.

There is room for Aiyuk to have value here, but this 49ers offense appears to be trying to play it smart with Purdy. While they are letting him throw the ball 20+ times a game, they’re not asking him to make many deep throws in windows. That is limiting the potential for the likes of Aiyuk.

The connection between Amari Cooper and Deshaun Watson is really struggling to get going. Despite seeing 28 targets in the past three weeks, Cooper has just 10 receptions for 140 yards in that timeframe. The opportunities have been there, but he has just been impossible to trust on a weekly basis.

The matchup this week with the New Orleans Saints is a strange one. New Orleans is allowing an average of just 21.4 fantasy points per game to WRs in the last four weeks. However, that is somewhat impacted by facing a struggling passing game in the form of the Atlanta Falcons last week.

There’s a chance for Cooper and Watson to get on the same page this week finally. However, it would be a very brave decision for fantasy managers to rely on Cooper this week with the fantasy championship game on the line in Week 16.