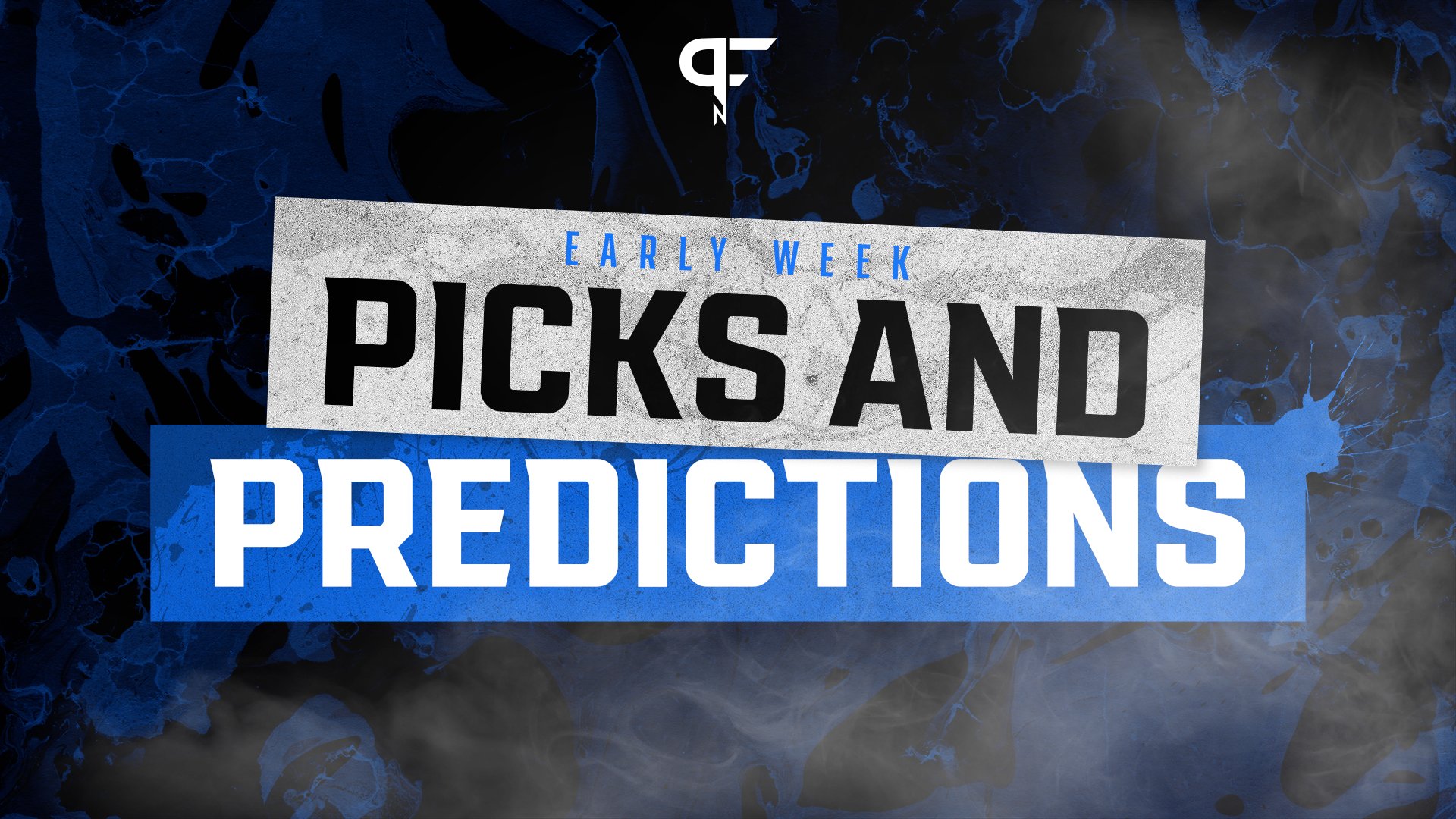 We’ve gone 51-35-1 picking against the spread and 62-23-1 on moneylines the past five weeks. Here’s an early look at our NFL Week 18 predictions and picks for all 16 games. The following betting odds are for picks against the spread, as well as moneylines based on DraftKings Sportsbook.

Each week of the NFL season features the expected, the moderately unexpected, and the completely unexpected. When betting on point spreads and moneylines, we need to focus on the first two outcomes.

What are the highest-probability game scripts? Which interesting subplots could emerge? For example, we cannot anticipate when a little-used fullback will fall into the end zone twice in one half. But we can assess the likelihood that one team’s backfield will earn more scoring opportunities.

With that in mind, here are our preliminary assessments of how each game might proceed.

The Chiefs are playing for the AFC’s No. 1 seed and a first-round bye. Despite some shaky performances lately, they remain one of the most complete teams in the league (although their defense is the worst — in terms of points given up per game — since 2018).

The Raiders are finished despite three last-second wins and nine losses by a touchdown or less. Frankly, there’s not much separating Vegas from the comfortably playoff-bound Vikings. They’ve scored almost as many points, and have yielded fewer points to their opponents.

The big question here is whether the Raiders’ key playmakers will compete for a full 60 minutes — or at all. Too soon to know. For now, I’m comfortable with Vegas playing enough starters to keep this one within 10 points.

The biggest AFC South battle since Week 18 last season, when the 2-14 Jaguars upset the Colts, denying Indy a playoff berth.

This year’s Jags are much better, and this year’s Titans — a year after claiming the AFC’s No. 1 seed — are objectively worse. Even a healthy Ryan Tannehill probably wouldn’t be enough to end Tennessee’s free fall. Once again, it will be Derrick Henry or bust for a 7-9 team that was once 7-3.

A few weeks ago, the Bucs were down 16-3 to the Saints with just over three minutes remaining. Their miraculous comeback indirectly clinched them the NFC South title yesterday.

Given their injury woes late last season — including to Leonard Fournette and Chris Godwin — I’m betting they’ll play it safe and rest (or significantly reduce the workload of) most starters. Unless this point spread changes dramatically, Atlanta should hold the edge.

A fascinating point spread. On the one hand, Buffalo holds a distinct edge against a generally weak Patriots passing attack. On the other hand, New England is fighting to keep the No. 7 seed in the AFC. I expect head coach Bill Belichick and his staff to develop a plan to keep this a one-possession game.

We’ll likely see a run-heavy approach for New England, featuring Rhamondre Stevenson and Damien Harris, and surprise a gadget play or two from guys like Kendrick Bourne. No doubt, the Bills will get their points. But the Patriots will put up a good fight.

This point spread assumes the Bears have an excellent shot at the upset. I’m not ready to go there.

As the Lions proved on Sunday (and as many other teams have proved this season), Chicago has one strength: their running game — principally, Justin Fields. But facing above-average run defenses, they’re not dynamic enough to adjust. That should do them in against the Vikings.

We’re all waiting to see if Lamar Jackson returns. With Tyler Huntley under center, Cincinnati holds a sharp edge over their divisional rivals in a battle for postseason seeding.

If Jackson returns, this spread probably will drop to -2 or -1. In that scenario, I’d still pick the Bengals, thanks to a robust passing game that should overpower Baltimore, handing Cincy the AFC North crown.

The Broncos are already preparing for the 2023 season. They don’t have a choice after getting eliminated from postseason contention two games ago. The Chargers, meanwhile, will be one of the most dangerous Wild Card teams in recent years.

We might see plenty of backups in this one, as LA will go on the road in the first round of the playoffs regardless of what happens. Health has been a major problem for them. The X-factor will be Russell Wilson’s seemingly desperate attempt to establish some degree of legitimacy heading into an assuredly chaotic offseason.

The formerly 4-8 Packers trailed by nine points in the fourth quarter to the Bears. Their season might have ended there. Instead, they came back to win and then vanquished their next opponents to control their postseason destiny.

The Lions’ journey to relevance is no less dramatic after beginning the season 1-6. But their victory over Green Bay in Week 9 kicked off a 6-2 run, putting them one win — and one Seattle loss — away from an improbable playoff appearance.

I’m going with the home team, not because Green Bay is objectively better, but because Aaron Rodgers, Aaron Jones, AJ Dillon, Jaire Alexander, and so many other Packers have been here before.

Two bottom-tier passing games face off to determine their NFL draft position, and to size up just how badly they need to completely remake their QB depth charts.

Indianapolis leads the league with 18 interceptions. Houston is tied for second with 17. The Colts have taken the second-most sacks in the NFL. The Texans are near the bottom with only 3.8 yards per carry. This game probably will be decided by which team makes the fewest mistakes.

So it’s come to this. Last year, the Dolphins and Jets watched as the Bills and Patriots represented the AFC East in the playoffs. This year, history might repeat.

MORE: Miami Dolphins’ Season on the Brink as Stars Disappear at the Worst Possible Time

For both teams, QB injuries and erratic play have almost doomed their hopes. Critically important is this game’s locale. Miami holds a one-game lead on New York and still has a realistic shot at reaching the postseason. Their superior backfield and receivers should compensate for a seemingly more vulnerable defense.

Both teams somehow were still in postseason contention heading into this past Sunday. More than that, the Panthers squandered a 21-10 fourth-quarter lead to the Bucs; a victory over Tampa Bay would have put Carolina in the driver’s seat for the NFC South title.

Instead, we’re waiting to learn which starters will start. Yes, the traditional Week 18 pastime (formerly Week 17 when the NFL had 16-game regular seasons) is in full effect. Will Alvin Kamara and Chris Olave see the field? What about D’Onta Foreman and Chuba Hubbard?

If both teams play their starters, the Saints have the edge.

Admittedly, I didn’t believe the Giants could make the playoffs, even when they were 7-3. A depleted receiving corps that leaned too much on Darius Slayton, and a backfield that overworked Saquon Barkley (when he was on pace for 400+ touches) seemed destined for a regression, especially as their schedule got more difficult.

But here we are, the underdog Giants looking to topple the NFC-leading Eagles on the eve of the playoffs. Jalen Hurts’ availability or unavailability will shake up this betting line. For now, I’m comfortable picking the Eagles to rebound after Sunday’s ugly loss.

I was 10-3 on moneylines Sunday. The Steelers’ dramatic win over Baltimore was one of my misses. Pittsburgh has been one of the surprising stories in 2022. Although they’ll need some help to reach the playoffs, they’re set up nicely to overpower the Browns.

I’m still not clear why Cleveland started Deshaun Watson in a meaningless game. An ACL tear could set back this franchise another year while making their $250 million (guaranteed) investment an even bigger on-the-field liability in 2024 and beyond.

After a thrilling victory over the Raiders, San Francisco will go all out once again in Week 18. Why? Because if the Eagles lose to the Giants, the Niners can claim the NFC’s No. 1 seed and a first-round bye with a win.

The scoreboard could wreak havoc on this one. For example, if Philly goes up by three touchdowns early, we might see the 49ers play things a bit safer with Christian McCaffrey, Brandon Aiyuk, George Kittle, Nick Bosa, and other impact starters — perhaps even Brock Purdy.

But assuming the Giants keep things relatively close, I’m anticipating David Blough and an array of Arizona starters and backups facing one of the league’s juggernauts.

Seattle still doesn’t control their postseason destiny, thanks to Green Bay’s non-seafaring demolition of the adrift Vikings. Although Cam Akers has reclaimed his status as a deserving starting RB, most of the world understands that Baker Mayfield and his ragtag collection of receivers can do only so much.

The Seahawks are healthy and battle-tested. They defeated LA a few weeks ago largely through the air, as an injured Kenneth Walker III managed only three carries. Next weekend, Walker will be a key to Seattle’s victory.

We might never know why Washington head coach Ron Rivera re-installed Carson Wentz at QB in Week 17, or why multiple interceptions didn’t cause Rivera to re-think his decision.

But what’s done is done, and now the Commanders are on the outside of the postseason bubble with one very tough matchup remaining. It probably won’t matter who’s under center. With the NFC’s No. 1 seed on the line, the Cowboys should deliver a dominant performance.