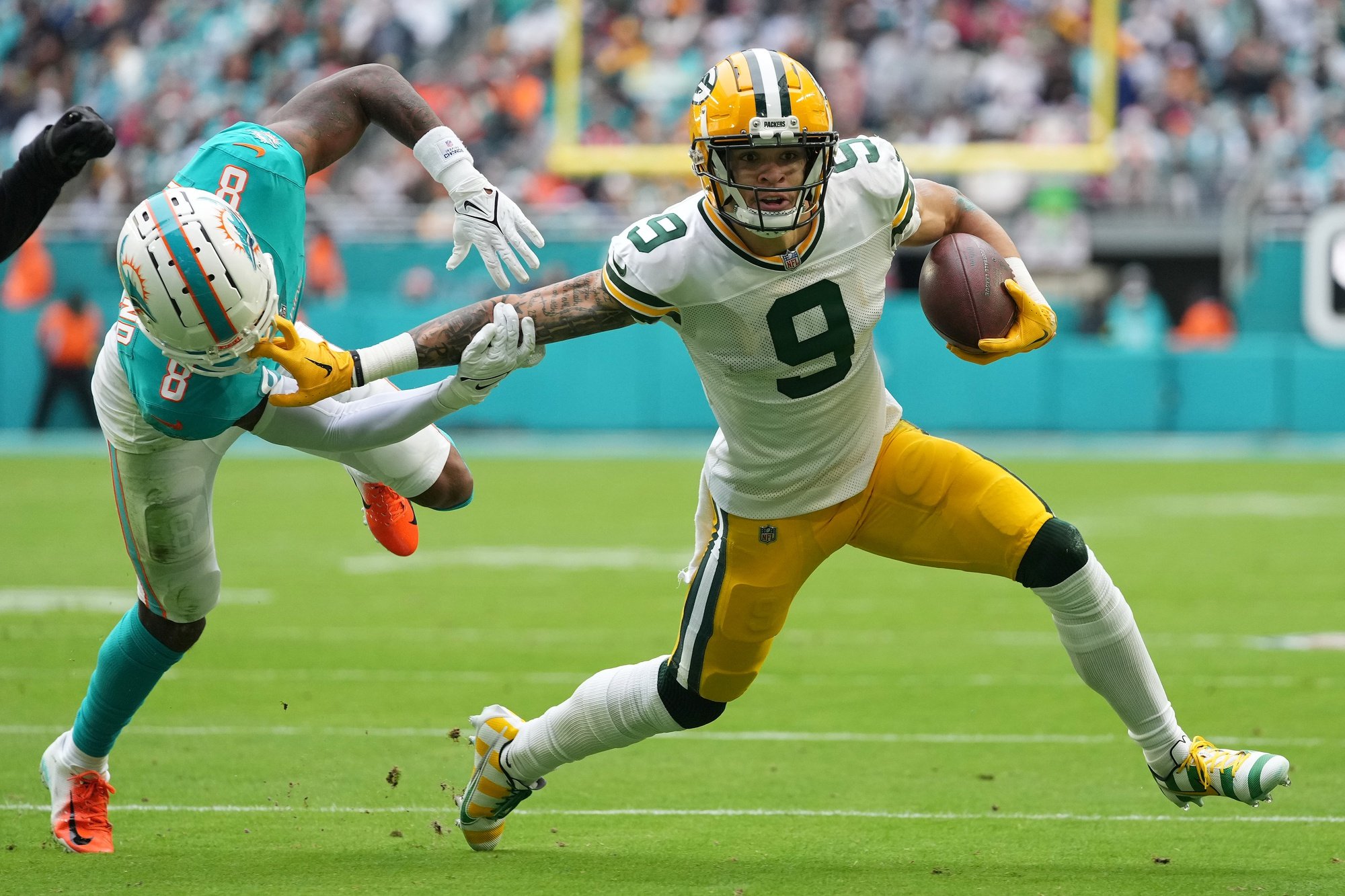 With fantasy football championships on the line for many managers in Week 17, the WR injury report has a lot of names that could make or break seasons. Let’s examine the latest news from around the NFL and the fantasy implications of the various injury updates.

With the likes of Christian Watson, A.J. Brown, Jerry Jeudy, Deebo Samuel, Tyler Lockett, Diontae Johnson, and others dealing with injuries, there’s plenty to work through this week.

While the advice in this injury report is largely aimed at season-long fantasy leagues, it can also be useful in other formats of fantasy football. Whether you play in DFS contests or partake in Underdog Fantasy Best Ball drafts, the WR injury updates below can allow you to get ahead on your research for Week 17.

After we saw Christian Watson leave the Green Bay Packers Christmas Day game with a hip issue, it wasn’t a good start to see him listed as a non-participant on Wednesday. While head coach Matt LaFleur told reporters that Watson would not practice Wednesday, he didn’t elaborate on the severity of the issue. That leaves fantasy managers very much in the dark looking ahead to the weekend.

Unless Watson is completely cleared, it will be hard to trust him this week. Hip issues can be easy to aggravate, as we saw numerous times with Ja’Marr Chase when he had a hip injury. Watson could easily end up being an in-game downgrade, which would be extremely damaging to fantasy managers’ chances in semifinals or championship games.

If Watson misses time, the big winners would be Allen Lazard and Romeo Doubs. The matchup with the Minnesota Vikings is a good one, as the Vikes allow the third-most fantasy points to WRs at an average of 38.45 over the last four weeks. However, outside of Watson, it’s been hard to find consistency with the Packers’ WRs this year.

With A.J. Brown opening the week as limited due to a knee issue, it doesn’t seem like he’s in major danger of missing this week. Philadelphia’s Wednesday practice was just a walkthrough, so his status is an estimation. We’ll need to see what happens when the Eagles hit the practice field properly on Thursday.

If Brown is active, he remains a must-start option. Even with Gardner Minshew under center, Brown still had six receptions for 103 yards on eight targets. He now has 100 receiving yards or a touchdown in each of the last five weeks.

Jerry Jeudy was seen leaving the practice field after grabbing his ankle during the open portion of the session. He missed two games earlier in the season with an ankle issue and appeared to injure it again on Christmas Day. With the Denver Broncos already eliminated from the NFL playoffs, they are unlikely to risk Jeudy on Sunday unless he is at 100%.

Even if Jeudy ends up playing, it would be tough to trust him. This ankle issue seems to be nagging at him and leaves the wideout at risk of re-injury. It’s especially frustrating because Jeudy has been a bright spot in the Broncos’ offense. Over the last four weeks, he is averaging 82.75 receiving yards on 6.25 receptions per game. He also found the end zone three times in Week 14 against the Kansas City Chiefs, who Denver plays this week.

After Deebo Samuel missed the last two weeks with knee and ankle issues, he opened Week 17 as a non-participant. At the start of the week, head coach Kyle Shanahan said Samuel had a chance to practice “later in the week.” On Wednesday, he told reporters that Samuel has a chance to practice Thursday.

That could mean we see Samuel this week, but it would likely be in a limited fashion. Unless the star playmaker somehow manages to get back to being a full participant on Friday, it would be hard to trust him in fantasy lineups, even if he ends up playing.

There was a lot coming out of Seattle last week that Tyler Lockett could return this week. However, the Seattle Seahawks WR opened the week as a non-participant, casting some doubt on that. It will be interesting to see how the Seahawks approach this. Lockett is experienced and talented enough that he could suit up without officially practicing.

With a hand injury, Lockett has likely been able to stay physically in shape, so any ramp-up time should be short. With the Seahawks’ season potentially on the line this week, it would be a surprise to see Lockett inactive against the New York Jets. If he is active, you have to consider starting him. The issue will be if he is a game-time decision, in which case fantasy managers may have a tough decision to make with this game being a 4 p.m. ET kick off.

Diontae Johnson opening the week as limited with a toe issue is a good sign coming off Saturday Night Football. Last week, Johnson was questionable after not participating in practice on Wednesday or Thursday. Despite concerns over his health, Johnson played 88% of the offensive snaps and saw seven targets.

Last week saw a slight downturn in output for Johnson, but he still scored 9.9 fantasy points, reasonable production for a player who was injured and playing in questionable weather conditions. When the Pittsburgh Steelers played the Baltimore Ravens in Week 14, Johnson had six receptions for 82 yards on eight targets. He has firmly re-established himself as a fantasy option, and that should continue this week.

After Chris Olave missed last week, it was good to see him back at practice to open Week 17. Hamstring issues can be tricky, so this is something to watch. We just saw CeeDee Lamb have success against the Philadelphia Eagles secondary, so Olave could be an intriguing option this week. However, he has only scored double-digit points in half-PPR scoring in two of the last seven weeks.

This all means that Olave could be a useful option in 14-team leagues, but he may not be a starting option we can trust in 12-team leagues.

After Courtland Sutton suited up and played on Christmas Day, there should be no concern about him missing time in Week 17. The Broncos had Sutton playing on 79% of the offensive snaps, targeting him seven times with five receptions for 64 yards.

Sutton should be on the field in Week 17, but trusting him in anything shallower than 14-team leagues is tough to do.

We once again have Julio Jones on the injury report this week with his knee. Jones missed Week 15 but returned last week. He was targeted just twice for five yards on one reception, though one of those targets was an end zone shot, which, if completed, would have made Jones a borderline 14-team starting option. The future Hall of Famer has just three games over eight fantasy points and two games over 10 fantasy points in his nine appearances.