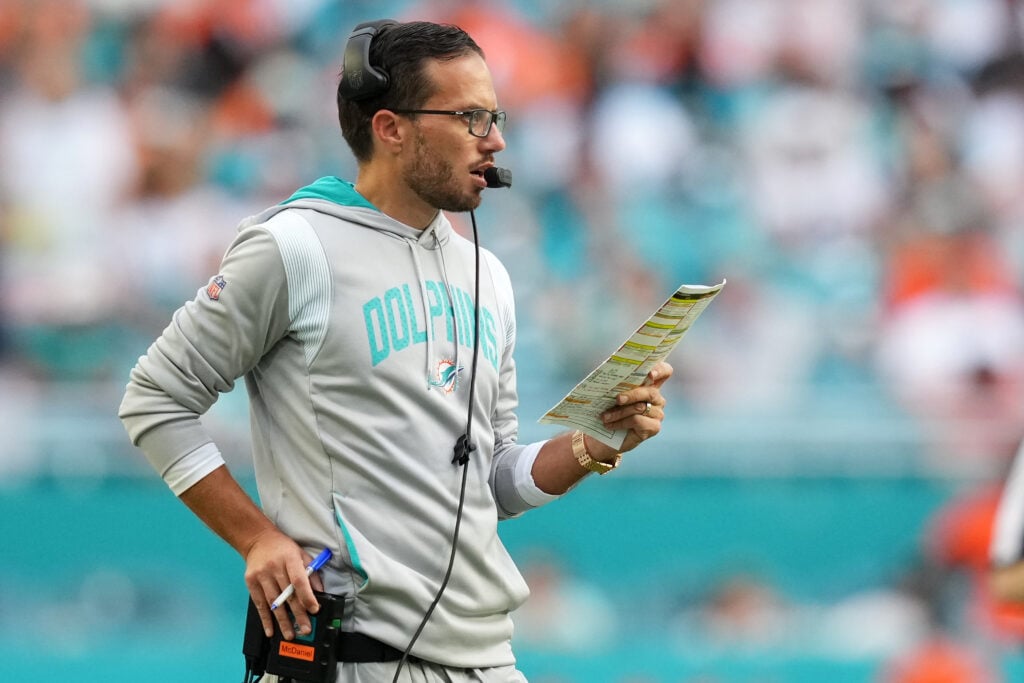 MIAMI GARDENS — Mike Glennon strolled through the Miami Dolphins‘ locker room Wednesday and, before he sat down, turned to his left and introduced himself to linebacker Brennan Scarlett.

These exchanges happened all the time in the NFL as new players acclimate themselves to a new environment. Two things made this introduction different, however.

First, it happened with more than a dozen members of the media huddled around Glennon, waiting for the chance to talk to him. Second, there’s a nonzero chance Glennon sees the field for the Dolphins against the New York Jets Sunday — in one of the franchise’s most important games in the last two decades.

“It’s definitely a unique situation,” said Glennon, who has thrown 47 touchdowns and 35 interceptions in 31 career starts. “I was watching the game the other day like most NFL fans were.

“You see Teddy [Bridgewater] go down, and whenever a quarterback goes down this year, you say, ‘Maybe this will be a shot.’ I saw the thing last year that said [there were] 64 NFL starting quarterbacks this year, which was like a record since the strike.

“I’m thinking, ‘If there’s something that’s telling this might be over, this is the year.’ But here we are. We’ll see what happens. You never know. I’ll do whatever I can this week to get ready.”

So to recap, a dude who last week thought his career was over might be all that stands between the Dolphins and the worst collapse in franchise history.

We’re in uncharted waters here, with Tua Tagovailoa still out indefinitely with a concussion and Bridgewater unable to grip the football due to a dislocated pinky.

That leaves rookie seventh-round pick Skylar Thompson as the team’s only healthy quarterback. The Dolphins also have significant questions about the availability of Xavien Howard, Bradley Chubb, and Terron Armstead — all of whom missed Sunday’s loss against the Patriots.

It’s a bleak reality for a team that once was 8-3 and thinking 1 seed but is now 8-8 and needs a win and help just to sneak into the playoffs. Tagovailoa’s two stints in concussion protocol derailed the season. It is on Thompson and possibly Glennon to get it back on track.

The Dolphins held off on naming a starter Wednesday, presumably because Bridgewater’s health is still such a wild card.

If he cannot go, Thompson will almost certainly start. But the question is how long the leash will be if he again struggles. Thompson has had encouraging flashes as a rookie but has struggled to string together a bunch of good plays in a row.

“A lot of encouraging stuff,” Thompson said when asked what he saw upon reviewing the game film from Week 17. “Obviously, the interception was tough – had points there — but I felt like as the game went on, I was getting in a rhythm there and made some plays.

“I think for us as an offense, for me to finish with a touchdown gave us some positive momentum moving forward,” he continued. “There’s always things to learn from, as always, every situation is different. It’s just another experience I got being thrown in there, playing against a good defense on the road, divisional game. Some positive takeaways were encouraging for me.”

Thompson knows what’s in store this week against the NFL’s No. 4 scoring defense. He’s already played against the Jets, replacing Bridgewater on the Dolphins’ second offensive snap after a spotter saw signs of a possible concussion with Teddy.

Thompson, in that game, completed 19 of 33 passes for 166 yards and an interception. Those stats accurately depict his play since joining the NFL in April. The Dolphins are explosive on offense with Tagovailoa. They’ve been limited with Bridgewater and Thompson.

Still, McDaniel and Thompson are confident that can — and will — change in Sunday’s massive game. But if things go sideways early, there might just be one player who can save them: Glennon.